What is the best weld reinforcement? Is it the higher the better?

The e1 &e2 in the following picture means weld reinforcement. The extra height is not only required by the welding process, but also has a certain impact on the safe operation of the vessel, especially the fatigue life.

Effect
The welding of pressure vessels is mostly multi-pass welding (such as manual welding, automatic welding), and the weld bead of the subsequent welding is equivalent to the effect of heat preservation, slow cooling and tempering of the previous weld, and the grain of the previous weld Refinement. The excess height is equivalent to the function of heat preservation, slow cooling and tempering for the outermost strength weld bead, so the excess height is the requirement of the welding process. 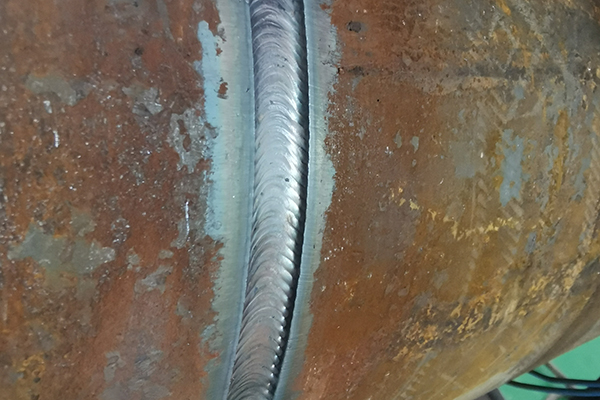 Harm
After the joints are welded, the process effect of the remaining height is completed, and the existence of the remaining height will have some adverse effects on the operational safety of the vessel. The Japanese used to make two sets of test containers, one set of welding is to trim the residual height, so that the welding seam is flush with the surface of the base metal, which is called the removal of residual height group;

The other group is welded without any treatment, and it is called the retaining group. These two groups of vessels are subjected to pressure fatigue tests under the same working conditions to compare their fatigue life. The test results show that the container of the remaining high retention group breaks first, and the average fatigue life of the two groups differs by 2.1 to 2.5 times.

Our country has carried out the pressure fatigue test of the three-layer thermal jacket simulation vessel. The test container has an inner diameter of 350mm, and each layer is made by coil welding of a 6mm thick 15MnVR steel plate. Due to the small inner diameter of the container, the surface of the welding seam was not treated after welding, and only a section of the longitudinal welding seam on the inner surface was ground for the need to measure the stress and stick the resistance strain gauge.

The container leaked after the pressure fatigue test. It was dissected and subjected to magnetic particle testing. It was found that the fusion line on the side of the longitudinal weld on the inner and outer surfaces of the inner cylinder showed magnetic marks, indicating that the longitudinal weld on this layer had been cracked. Only the repaired area is intact, and there is no accumulation of magnetic particles on the inner and outer surfaces.

In addition, the existence of excess height destroys the continuity of the geometric shape of the weld surface, and will generate additional bending moments due to abrupt shape changes, resulting in higher local stress. These crack sources caused by welding defects will accelerate under the action of local stress. Expand until it breaks.

If the residual height is removed by grinding and other methods after welding, it will not only make the appearance of the weld be consistent with the base metal, but also eliminate the source of local stress, and at the same time eliminate the various welding defects that may exist on the surface of the weld. The nucleation and the slow expansion process can produce fatigue fracture.

For vessels that do not require fatigue analysis and design, most domestic and foreign standards allow a certain amount of excess height (this allowable amount is generally subject to non-destructive testing operations), and only the Japanese Ministry of Labor’s standard “Pressure Vessel Construction Specification 1) It is stipulated that the excess height should be removed so that the surface of the weld is flush with the surface of the base metal, otherwise the coefficient of the welded joint should be reduced.

Our company is a professional automatic welding supplier in China. With more than ten years of professional welding equipment research and development experience, we will be able to provide you with the most reliable equipment and the most complete service.